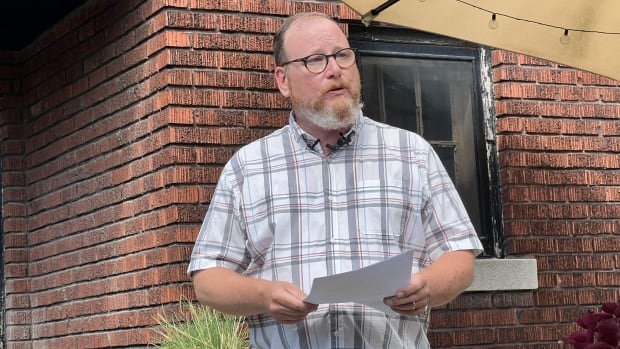 Windsor, Ont., mayoral candidate Chris Holt says the city needs to rethink how it invests its money, but the mayor calls Holt’s plan risky and radical.

“Our city is leaving millions of dollars on the table that should instead benefit our community,” Holt said at a Tuesday press conference on her back deck.

Holt said the city should use One Investment, a nonprofit company that, according to its website, offers “investment options that meet the needs of municipalities across Ontario.”

Holt said the city’s $333 million reserve fund earns less than 1% a year in interest. He said using One could bring in an additional $6 million a year, which would equate to a 1.4% increase in the city’s operating budget.

“We could have done maintenance work on an additional 300 miles of city roads or we could have made three times as many bike lane improvements,” Holt said.

But Mayor Drew Dilkens, who has not announced whether he will run in the October mayoral election, called Holt’s plan “risky and radical.”

Dilkens’ written statement said what Holt is proposing “would expose ratepayers to greater market volatility, increase municipal debt, and end up costing more in interest payments than would ever be recouped through investment income.” “.

Almos Tassonyi, who lives in Toronto and is an executive fellow for public policy at the University of Calgary, said money allocated to a single investment fund would bring a higher return and that it’s about a relatively low risk investment.

“He has a long track record,” he said.

“I don’t really see that as a risky prospect. It just has to be considered in the context of infrastructure funding decisions as well as your excess cash.”

Holt said other Ontario municipalities, such as Markham and Whitby, can earn millions on interest using One, but Tassonyi said what works for one municipality doesn’t work for all.

Anywhere that we can find extra money or we can cut costs and reinvest that money in things that people want, that’s a great discussion to have.-Daniel Ableser

“Any municipality can allocate funds to one fund and funds to other vehicles depending on how they view when they want to withdraw the funds and invest in infrastructure or any other pressures they may have.”

Daniel Ableser, who calls himself a City Council watcher, said Holt is likely to grab tax issues because he has promised a fully costed platform and will be creative in finding ways to pay for his ideas.

“I’m all for those discussions and any place where we can find some extra money or we can save some cost and put it back into things that people want, that’s a great discussion to have,” Ableser said.

Investment strategy of a top 1% Manager

Think outside the box for your investment strategy.